The Bay Citizen recently reported on rising bike accidents and their leading causes and locations, using data reported to the SFPD within the last two years. With helpful infographics, the article provides statistics and viewpoints both bicyclists and drivers should be aware of.

Accident Hot Spots
For 2009-2010, these most dangerous neighborhoods averaged the following number of accidents:

…while the most dangerous streets and intersections were:
Reported accidents increased from 554 in 2009 to 593 in 2010.
One suggested explanation is that there is an ever-increasing number of riders. According to the SFMTA, the number of cyclists increased 70% (from the count in 2006) at the 5th and Market intersection, 75% at 17th and Valencia, and more than 100% at Fell and Scott.
However, between 2009-2010, the increase in cyclists was only 3% while the increase in accidents went up by 8%, showing that accidents are, in fact, climbing at a faster rate than ridership.
Assigning Fault 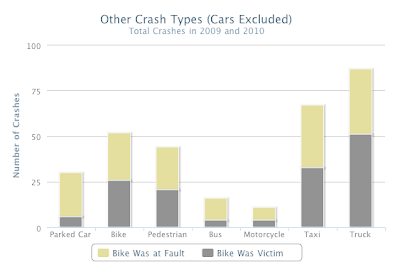 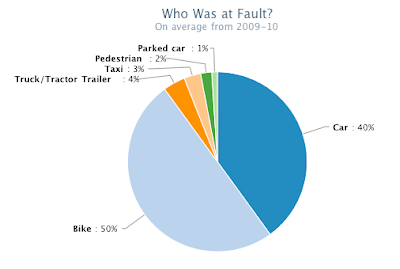 According to these graphs (created by The Bay Citizen) a shocking 50% of accidents are the fault of the cyclist, with cars in a close second at 40% of the time.
However, it is important to keep in mind that it’s the SFPD that “determines fault”, and that cyclists feel very strongly that the cops often favor the drivers. Take for example, Kate McCarthy’s story:

Kate McCarthy, 31, was biking up Mission Street in February 2009 when a recreational vehicle going the opposite direction made an illegal left turn right in front of her. She swerved, but still collided with the giant vehicle, crashing her bike and cutting her face. After a police officer showed up to take the report, he refused to cite the driver, even though there were several witnesses, according to McCarthy. The officer would not write up a police report assigning fault.
McCarthy filed a complaint with the city’s Office of Citizen Complaints. Three months later, the body ruled that the police department should have issued a report.

Measures for Safety and Prevention?
A situation like Ms. McCarthy’s is concerning for cyclists because it raises the question, “Who is protecting me from being run down on the streets?” If not the cops, then who?
In response to this important question, cyclists and organizations like the SF Bike Coalition have successfully lobbied for protection in street medians and more bike lanes. But these small successes have not been enough.
Take, for instance, the Market and Octavia streets:

While six accidents happened in 2009, eight occurred in 2010 — all of them taking place after the improvements were made. Almost every crash here is caused by cars making illegal right turns.
“The more things they try there, it doesn’t really help,” said Shaana Rahman, a lawyer who has represented two cyclists in Market/Octavia crashes. “I feel like the answer is to let the cars go right and move the bike lane to a mid-bike lane.”

It is clear from this data–which does not include unreported accidents–that the danger is very much real and very steadily building. So the only question that remains is: How much longer do we have to wait for the city to catch up with these dangers and provide reliable solutions?